The general appearance of the presented image can be compared to two components, an organic element and a material element.
An organic element exposed as a form of an entity acting on reality by its dismemberment with an interaction acting before the movement in the horizontal direction of deviation from right to left. Rectangular material elements in the shapes of simple geometric figures.
The mental reaction simply responds to sight with a bright color tone with one of the geometric figures. Color marking of individual forms of the most important artistic forms: carmine – as an organic element, other colors as material elements.
The background of the image-reality, a horizontal line, and individual additional elements, including three rectangles, bright figurative elements of the microworld rushing towards the levels, a brown form with black connectors and a colorful background with letters forming the word P R Z E C H O D Z E. space-time existential movement. Numbering 1,2,3,4,5,6,7,8 organic 1,2,3,4,5,6,7,8 material. Generally speaking, the image is an attempt to present an autoorganic being in displaying space-time reality on the basis of a specific individual situation.

Painting was done on the basis of a sketch as a real situation remembered during a visit to the registration office. During the recording, the reactions taking place between individual organisms evoked specific artistic forms in the minds of the participants. Two graphic forms appearing as supplicants, the form of the figure recorder in the central part of the painting against the background of a gray wall is the closest to reality. The 7 fingers of the registering hand were moved in time, increasing the number based on psychophysical reactions occurring one after the other at a certain time. Numbers 1,2 indicate the characters of petitioners. The Seven-Finger Hand Reaction took place on November 11, 2022 between 1:00 PM and 1:30 PM Eastern European Time. 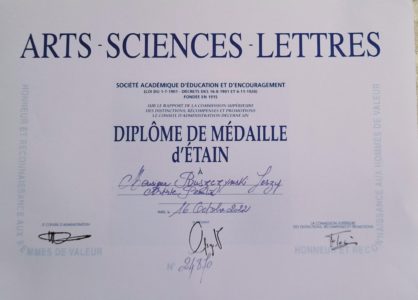 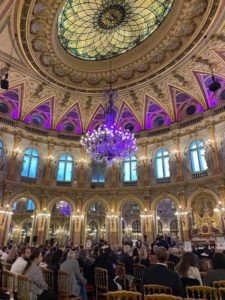 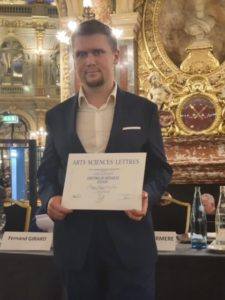 4. Intuitive Action (plastic forms in the form of yellow fire circles placed on the bodies of the characters)

1. Direct action consisting in reproducing the authentic figures of a woman and a man lying down on a cardboard, consisting in outlining the figures on a 1: 1 scale. 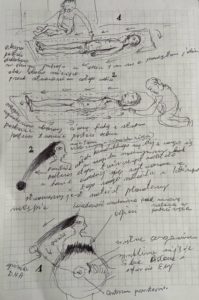 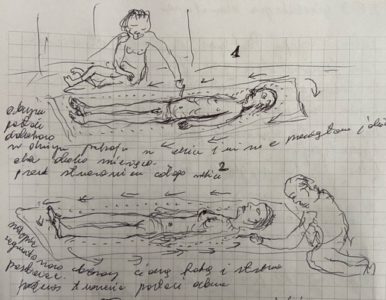 2. The layout of the characters is based on the layout used by Albrecht Durer 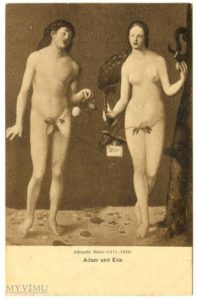 3. Application of the body created from the earth on the basis of the biblical text, green forms on the bottom coming out of the ground – the beginning of life, 6 black points as signs on the bodies of the figures. 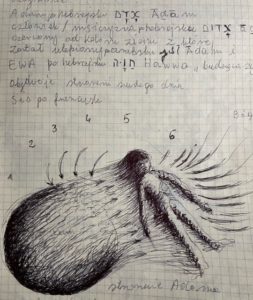 Taking out a fragment of Adam’s body in the rib and creating from this fragment of Eve’s body – red forms passing from Adam’s body to Eve’s body.
In the Hebrew ADOM, man from green to red from the color of the earth from which he was made, Eve-Hawwa-awakening to life, both created on the sixth day. 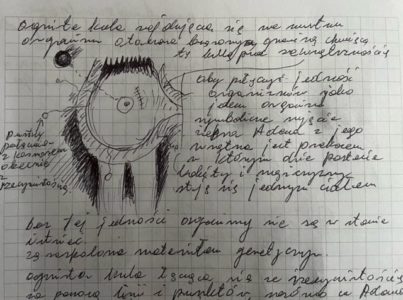 As the primary explanation of the tempting Satan in the form of a serpent divided into two parts, just like the twigs from which the symbolic apple of knowledge is torn, the liberation of consciousness, which liberates humanity in man as the dominant species on earth. 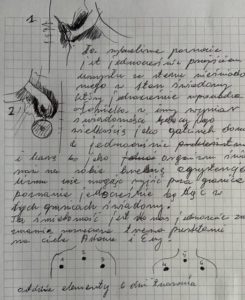 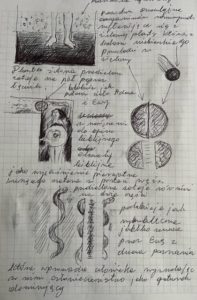 Symbolic knowledge of good and bad is at the same time the transition of the mind from the unconscious state to the conscious state, which triggers existentialism as a punishment and a burden borne in a man who is not able to penetrate to the end and understand the meaning of existence and his existence and being.
The bully and suffering of existence is the punishment for breaking a warning. 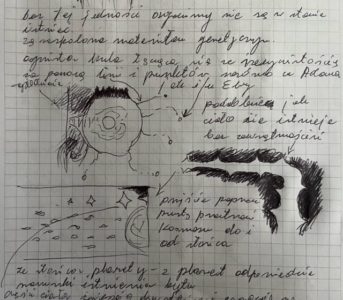 4. Intuitive operation – yellow and red forms placed on the characters with additional elements 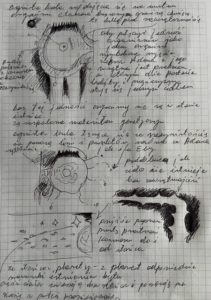 a. A form of a red DNA helix extending from a blue planet into a central white point in the form of Adam

b. red rays coming from the head – awakening consciousness-mind in Adam and Eve.

c. the yellow forms emerging from the two large forms connect the bodies to the cosmos, as do the deformed bodies of Adam and Eve.

d. link-sun as the primary cause of emergence – reaction and union with the whole. 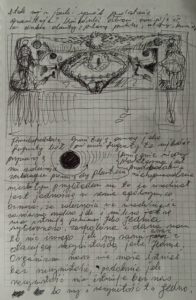 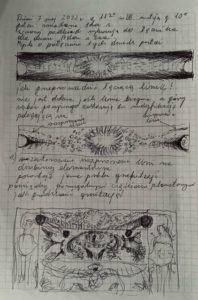 And awareness is our blessing and a curse at the same time.
The man’s consciously changed face into a self-portrait, in which the gaze directed towards the viewer asks:
isn’t it a wonderful gift given to us that we can consciously see,
or is it just an illusion?
For us, is the plucked fruit of a tree not only a dark force with only a boundless emptiness behind it? 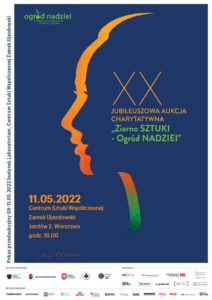 There is no freedom because everything happens according to the laws that govern reality,

Reason produces no concept, but only liberates intellectual concepts from the neglected limitations of possible experience and thus tries to extend them beyond the limitations of what is empirical.

The painting was made on the basis of a real situation in the surroundings of a closed room with two participating characters. The name of the room is the admission room.