Explanation of the painting “Looking at the name-day at E”, 2007. 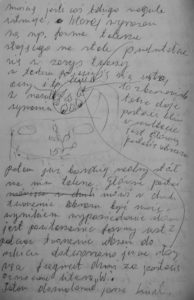 A fragment of the image, the upper part, the middle.

The central part of the image, fragment. 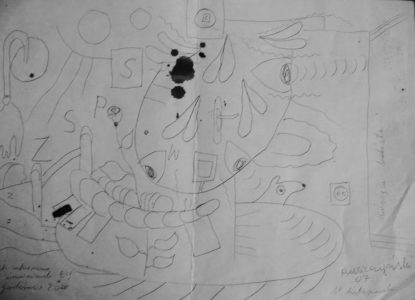 The sketch was made directly during the observed event, in the presence of E. and Z. and other organisms, objects and things that caused an influence on the overall composition and shape of the image. The letters marked in the sketch are omitted as a result of shifting the resulting image. A series of events from the moment the image was created to the final effect caused changes that were carried out twice. During the creative process, Mr. P. was introduced as an observer, why? It seems that the outcome of the decision would be to experience the impact of external reality. The influences that often have accidental sensations on us have their effect in the creative process. The continuous flow of images leaves traces in consciousness, the effect of which are subsequent creative decisions. The resulting from the flowing images probably draws so-called. intuition, but not entirely. Your contribution to intuitive creation also has what has been in us for a long time, i.e. the genesis of our formation. The involvement of intuition is quite difficult to be traced in each created image is a percentage different, and it all depends on the awareness of the attitude of own “I” to draw from its decks. To sum up, the picture in general character is a direct record of reality, it should be emphasized here the word “direct”, because it is a rarely used form due to the circumstances in which we come to stay, the more so that in fact there are also other direct shareholders of the image and having an impact on ourselves.

Turkish
We use cookies to ensure that we give you the best experience on our website. If you continue to use this site we will assume that you are happy with it.OKPrivacy policy